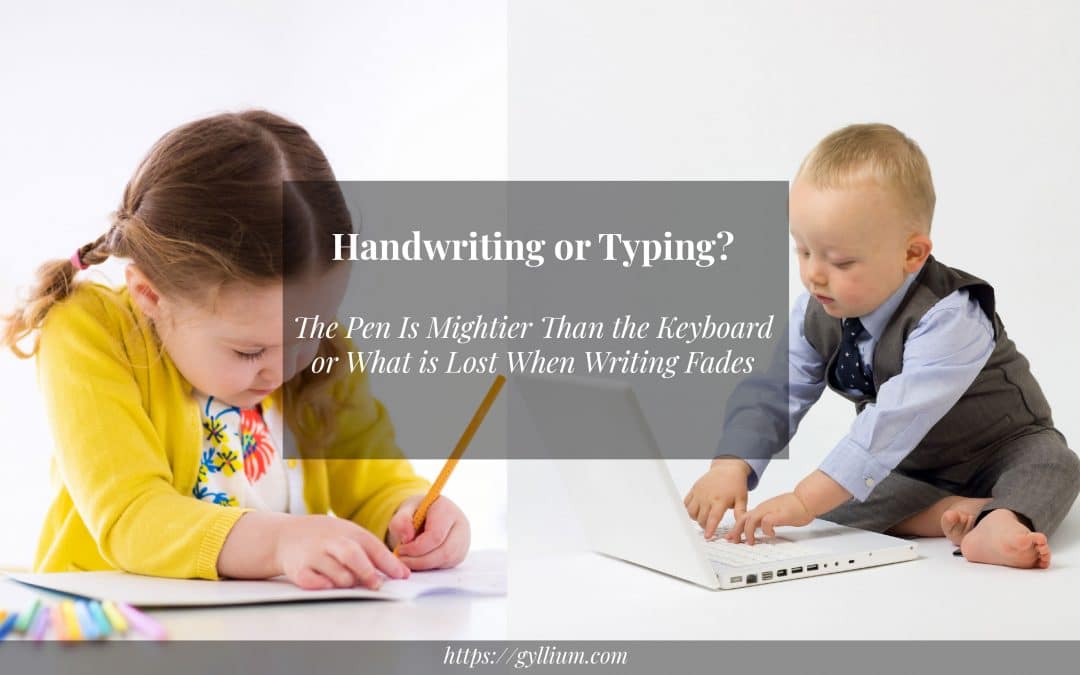 I was amazed to learn that the mandatory learning of cursive and handwriting, once compulsory in schools, now is not so much. Countries such as Finland have dropped joined-up handwriting lessons in schools in favour of typing courses. And in the US, the requirement to learn cursive has been left out of the Common Core standards, which have been adopted in most states, since 2013. The standards call for teaching legible writing, but only in kindergarten and first grade. After that the emphasis quickly shifts to proficiency on the keyboard. That really shocked me and made me think what are the implications of all that and where will that lead us?

Is handwriting really different to typing?

When I started researching the topic a vast information emerged backed up by numerous scientific studies. Before we delve into the facts and scientific conslusions, however, we have to discuss the essence of handwriting and typing and see if they differ and how.

According to scientists the two activities require completely different cognitive skills. When we type, we simply tap a key and perform the same movement no matter what letter we want to type. Therefore, it is relatively the same cognitive process each time and is a skill that is often acquired fast and easily.

By contrast, handwriting is a much more complex task. It takes years to master (if we think about all the fine motor skills little ones have to develop before they even grip a pencil). It mentally stimulates the brain and requires muscle memories to recall letter formations. When we write by hand unique neural circuits are automatically activated.

“When we write, a unique neural circuit is automatically activated,” said Stanislas Dehaene, a psychologist at the Collège de France in Paris. “There is a core recognition of the gesture in the written word, a sort of recognition by mental simulation in your brain. “And it seems that this circuit is contributing in unique ways we didn’t realize,” he continued. “Learning is made easier.”

An interesting phenomenon also lends evidence in support of handwriting and typing being different in their essence. In dysgraphia, a condition where the ability to write is impaired, sometimes after brain injury, the deficit can take on a curious form: in some people, cursive writing remains relatively unimpaired, while in others, printing does. In alexia, or impaired reading ability, some individuals who are unable to process print can still read cursive, and vice versa. This suggests that the two writing modes activate separate brain networks and engage more cognitive resources than would be the case with a single approach.

That is why psychologists and neuroscientists say it is far too soon to declare handwriting a relic of the past. New evidence suggests that the links between handwriting and broader educational development run deep.

It Is Not Just What We Write That Matters – But How

Children not only learn to read more quickly when they first learn to write by hand, but they also remain better able to produce ideas and retain information. In other words, it is not just what we write that matters – but how.

A 2012 study led by Karin James, a psychologist at Indiana University, lent support to that view. Children who had not yet learned to read and write were presented with a letter or a shape on an index card and asked to reproduce it in one of three ways: trace the image on a page with a dotted outline, draw it on a blank white sheet, or type it on a computer. They were then placed in a brain scanner and shown the image again.

The researchers found that the initial duplication process mattered a great deal. When children had drawn a letter freehand, they exhibited increased activity in three areas of the brain that are activated in adults when they read and write. By contrast, children who typed or traced the letter or shape showed no such effect. The activation was significantly weaker. “This is one of the first demonstrations of the brain being changed because of that practice,” Dr. James said.

Dr. James attributes the differences to the messiness inherent in free-form handwriting: not only must we first plan and execute the action in a way that is not required when we have a traceable outline, but we are also likely to produce a result that is highly variable. That variability may itself be a learning tool. “When a kid produces a messy letter,” Dr. James said, “that might help him learn it.”

Our brain must understand that each possible iteration of, say, an “a” is the same, no matter how we see it written. Being able to decipher the messiness of each “a” may be more helpful in establishing that eventual representation than seeing the same result repeatedly.

The effect goes well beyond letter recognition. In a study that followed children in grades two through five, Virginia Berninger, a psychologist at the University of Washington, demonstrated that printing, cursive writing, and typing on a keyboard are all associated with distinct separate brain patterns — and each results in a distinct end product. When the children composed text by hand, they not only consistently produced more words more quickly than they did on a keyboard, but expressed more ideas.

And brain imaging in the oldest subjects suggested that the connection between writing and idea generation went even further. When these children were asked to come up with ideas for a composition, the ones with better handwriting exhibited greater neural activation in areas associated with working memory — and increased overall activation in the reading and writing networks. It now appears that there may even be a difference between printing and cursive writing — a distinction of particular importance as the teaching of cursive disappears in curriculum after curriculum.

Dr. Berninger goes so far as to suggest that cursive writing may train self-control ability in a way that other modes of writing do not, and some researchers argue that it may even be a path to treating dyslexia. A 2012 review suggests that cursive may be particularly effective for individuals with developmental dysgraphia — motor-control difficulties in forming letters — and that it may aid in preventing the reversal and inversion of letters.

Some Notes on Note Taking

As laptops become smaller and more ubiquitous, and with the advent of tablets, the idea of taking notes by hand just seems old-fashioned to many students today. Typing your notes is faster — which comes in handy when there’s a lot of information to take down. But it turns out there are still advantages to doing things the old-fashioned way.

For one thing, research shows that laptops and tablets have a tendency to be distracting — it’s so easy to click over to Facebook in that dull lecture. And a study has shown that the fact that you have to be slower when you take notes by hand is what makes it more useful in the long run.

In the study published in Psychological Science, Pam A. Mueller of Princeton University and Daniel M. Oppenheimer of the University of California, Los Angeles sought to test how note-taking by hand or by computer affects learning. They have reported that in both laboratory settings and real-world classrooms, students learn better when they take notes by hand than when they type on a keyboard. Contrary to earlier studies attributing the difference to the distracting effects of computers, the new research suggests that writing by hand allows the student to process a lecture’s contents and reframe it — a process of reflection and manipulation that can lead to better understanding and memory encoding.

“When people type their notes, they have this tendency to try to take verbatim notes and write down as much of the lecture as they can,” Mueller says. “The students who were taking longhand notes in our studies were forced to be more selective — because you can’t write as fast as you can type. And that extra processing of the material that they were doing benefited them.”

Because people can type faster than they write, using a laptop will make people more likely to try to transcribe everything they’re hearing. So on the one hand, Mueller and Oppenheimer were faced with the question of whether the benefits of being able to look at your more complete, transcribed notes on a laptop outweigh the drawbacks of not processing that information. On the other hand, when writing longhand, you process the information better but have less to look back at.

But the students taking notes by hand still performed better. “This is suggestive evidence that longhand notes may have superior external storage as well as superior encoding functions,” Mueller and Oppenheimer write.

The study concluded that when students type they:

Not every expert is persuaded that the long-term benefits of handwriting are as significant as all that. Still, one such skeptic, the Yale psychologist Paul Bloom, says the new research is, at the very least, throught-provoking. “With handwriting, the very act of putting it down forces you to focus on what’s important,” he said. He added, after pausing to consider, “Maybe it helps you think better.”

The Conclusion: Don’t Toss Out Your Pen and Paper Yet

Taking notes on laptops rather than in longhand is increasingly common. Many researchers have suggested that laptop note taking is less effective than longhand note taking for learning. Prior studies have primarily focused on students’ capacity for multitasking and distraction when using laptops. The present research suggests that even when laptops are used solely to take notes, they may still be impairing learning because their use results in shallower processing. For that reason, laptop use in classrooms should be viewed with a healthy dose of caution; despite their growing popularity, laptops may be doing more harm in classrooms than good.

The research confirms that handwriting is the superior option (especially for older children in secondary school) as it results in better retention of information. Cursive or not, the benefits of writing by hand extend beyond childhood. For adults, typing may be a fast and efficient alternative to longhand, but that very efficiency may diminish our ability to process new information. Not only do we learn letters better when we commit them to memory through writing, memory and learning ability in general may benefit. So before we toss out paper and pencils, we need to still foster children’s handwriting skills, even in this digital age.

Do studies like these mean wise college students will start migrating back to notebooks? “I think it is a hard sell to get people to go back to pen and paper,” Mueller says. But it is definitely worth trying. And we at Gyllium would do our best to help that happen.