The Most Impressive Bookstores in the World

The golden age of bookstores may have passed, but even in these digital times the world is home to some mind-blowing bookshelf-lined shops that can lure everyone to spend browsing in them for hours on end. After all, nothing can replace the feeling of getting lost in a beautiful bookstore. Whether you’re looking to pass the time on a rainy afternoon or see what the locals are reading, these spots demand a visit if you happen to be nearby. After exploring some of the world’s most beautiful libraries, here we offer you a selection of some of the world’s most stunning bookstores. 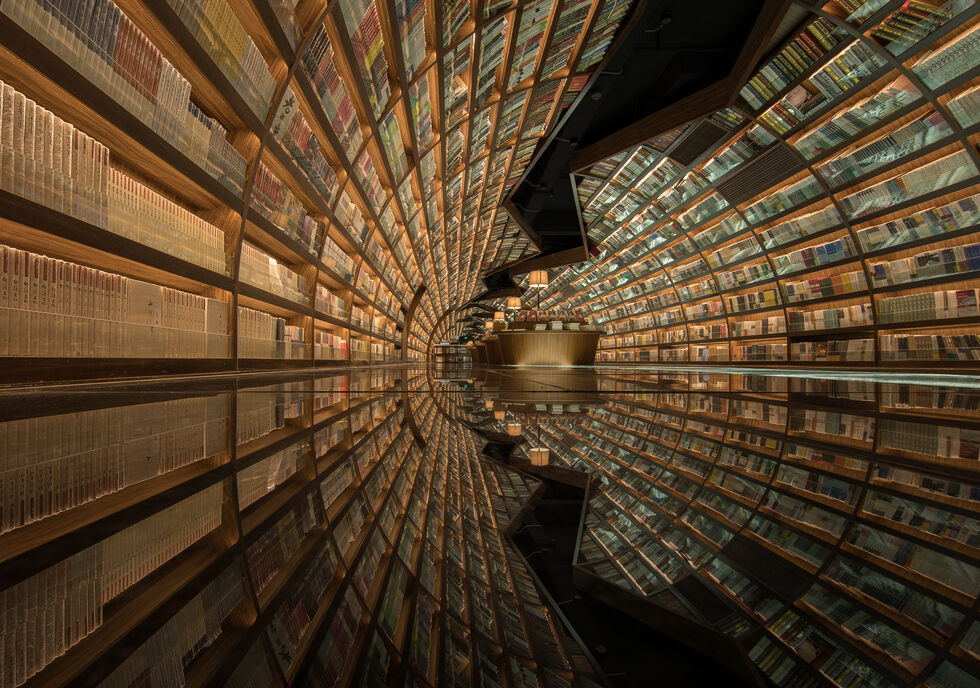 A bookstore and library in Yangzhou, China has created a bibliophile’s dream. Black mirrored floors shimmer beneath arched shelves that stretch to the ceiling, creating the illusion of a never-ending tunnel of books. A zig-zagging gap prevents the top of the shelves from touching. When reflected on the floor below, the lighting bolt shape, which represents a river, acts as a pathway to entice visitors to drift deeper within the building.

People who pass through the tunnel can pause to pluck books from the shelves. Those who carry on trekking through the trippy optical illusion will find additional architectural gems at the end. The tunnel leads to a children’s reading room. Here, a series of LED lights turns the ceiling into night sky freckled with stars that twinkle above bright, whimsical shelves. There’s also an adult reading room full of curvy architecture and, of course, more books to browse.

The Shenghai-based architectural studio XL-Muse designed the tunnel, which was completed in 2016. They drew their inspiration from the city’s closeness to the Yangtze River and its abundance of arched bridges. The designer used all kinds of arch to connect all areas,giving a sense of shock to every reader who comes into this space. And the  sense of mystery created by the soft light makes all readers thinking of the river under the bridge sparkling in the sun; it helps them to enjoy the happiness of reading with a peaceful mood. The wavy space maintains enough room for readers to sit and share ideas together during reading.

The idea of the architects was to be immersed in a “river” of books upon entering and they have surely achieved that and even more.

When you walk into El Ateneo Grand Splendid (180 Santa Fe Avenue), prepare to be awed. This mind-blowing bookstore is located in Buenos Aires. The building was opened as a theater in 1919 but for the past few years its function has been transformed by thousands of books. Now it is possibly one of the most beautiful bookstores you will ever see.

There are rows of bookshelves between the painted dome and the original balconies: they have even kept the original crimson stage velvet curtain. The stage has also been converted into a restaurant that has a pianist who adds a touch of music to the theatrical atmosphere. It retains its opulent Beaux-Arts décor and glamour using theater boxes for reading rooms. It is believed that over a million people visit this majestic bookstore every year.

There is nowhere quite like this place so if you happen to be in the neighborhood make sure to visit it.

Transformed from a 700 year old Catholic church to an ornate bookstore, the Polare Maastricht (or Boekhandel Dominicanen) is indeed a class apart. It houses a massive three-storey bookshelf with staircases, elevators and walkways. It has been named in more than one occasion as the most amasing bookshop in the world. Boekhandel Dominicanen  was voted the most beautiful bookstore in the world in 2008 by the British newspaper The Guardian. Since then, it continues to appear every year as the reader’s favorite bookstore.

The impressive book palace opened its Gothic doors in 2007 in the city of Maastricht. Its unique location was the site of a former Dominican church, established in 1294. Renovated and perfectly preserved, this temple to literature is truly incredible. The religious building was closed when French troops invaded the country in the last decade of the 18th century. The church, fortunately, did not fall into ruin despite being abandoned for more than 200 years. It served many purposes, including a bicycle warehouse until it was restored in 2006 for its current use as a magnificent bookstore.

The Dutch architectural firm MERKX + GIROD was commissioned to renovate the old church. The resulting structure earned them the 2007 Lensvelt Award for Interior Architecture. The restoration work achieved an amalgamation of opposite aesthetics through the preservation of the structure’s original elements, infused with the minimalist style of the interior design.

Visiting this old church bookstore and wandering this timeless space is a real treat. For many, leafing through those wonderful objects called books, is still the ultimate luxury. And just imagine: they offer Sleepless Sleepover: no better way to discover the bookshop as spending a night in it.

In the 15th century, a lavish Broerenkerk cathedral was constructed for daily worship in the Netherlands. Today, the building serves a different purpose: selling books. The cathedral was first transformed into a bookstore in 1836, but Dutch architectural firm BK. Architecten undertook a project to modernize the store yet still maintain the building’s original history.

“The architectural concept of this shop in church is based on two, sometimes conflicting, elements,” BK. Architecten wrote in an introduction to the project. “The first time we entered this church we immediately felt the historical value of this building. The space, height, long axis, high arches, stained glass windows, ceiling paintings and the pipe organ: this 15th-century building really earned its place in the city of Zwolle.”

Starting points for the design were found in maintaining the historical value and size of the church on the one hand, and on the other hand adding a logically functioning retail function. By keeping the three-layer installation separate from the ship, the 60m long church axis is retained. In materialization, austerity was chosen. Only white balconies and further natural materials have been added to the church building, so that the original architecture and paintings of the church remain dominant. In the designs of the furniture, inspiration was found in the work of Dom Hans vd Laan, founder of the architectural trend that is called the Bossche school.

Carturesti Carusel (“Carousel of Light”) is a breathtaking new bookstore that opened doors in the heart of Bucharest, Romania. Designed by Square One, the bookstore is located inside a beautifully restored 19th century building. Surrounded by bohemian, traditional and luxury clothing stores, this bookstore will surely blend in with its innovative and elegant style.

The 1,000 sq. m (10,760 sq. ft) retail space is situated on six floors and features over 10,000 books, 5,000 albums and DVDs and a top floor bistro. The main floor and basement feature a contemporary art gallery and media space and will also be used for cultural events and concerts.

The building created a hype long before the opening, most of which thanks to the history and the architecture of the place. In the early 1900s, it used to host the Chrissoveloni bank, founded by Nicolas Chrissoveloni, who bought the building at an auction. When the bank closed down in 1948, a men’s clothing store opened, and then, during the Communist period, a store called Familia /The Family was housed in the building. The current building owner, Jean Chrissoveloni, is the great-grandson of the 19th century banker. He invested some EUR 1 million in renovating the building, before leasing it for 10 years to the Carturesti chain, according to Romanian media.

For Harry Potter fans, this bookstore may seem familiar, as it has been featured several times in the movie series. The neo-gothic façade, heavily decorated walls, stained glass ceilings along with ornamented pillars are sure to impress you. Along with Bertrand in Lisbon, it is one of the oldest bookstores in Portugal and frequently rated among the top bookstores in the world (placing third in lists by guidebook publisher Lonely Planet and The Guardian).

The building was inaugurated on January 13th, 1906, in an important social event for both Portuguese and Brazilian societies, attended by famous people from different spheres – among them Guerra Junqueiro, a renowned Portuguese writer. As you walk through the doors of this bookstore you’ll notice that there is a marvelous stairway and the wooden walls are also very exquisite. The stained glass ceiling adds an amazing detail with Lello’s motto “vecus in labore”.

In 2013, CNN named Libraririe Avant-Garde as China’s most beautiful bookstore. It surely is one of the most unique ones as it is located at a mammoth parking lot spread over 4,000 square feet, which was once used as a bomb shelter. Instead of a shelf for best-selling books, visitors are welcomed by a replica of Rodin’s “The Thinker” sculpture.

The large crosses in all of shop’s branches are explained not only but the Christian believes of its owner.  Qian Xiaohua says: “Here in Librairie Avant-Garde, reading is our religion and this place is the heaven for book lovers.” The main hall of the bookstore serves as a forum for talks and concerts. It also houses a homey coffee shop, permanent exhibition space for beautiful book designs and a retail area for creative works by Nanjingers. Qian’s favorite artworks hang from the ceiling. Pillars in the store are etched with famous verses and poems.

Tips for Staying Healthy and Fit — No Matter What

Did You Know That The Royal Family is Not Allowed to Give Autographs?